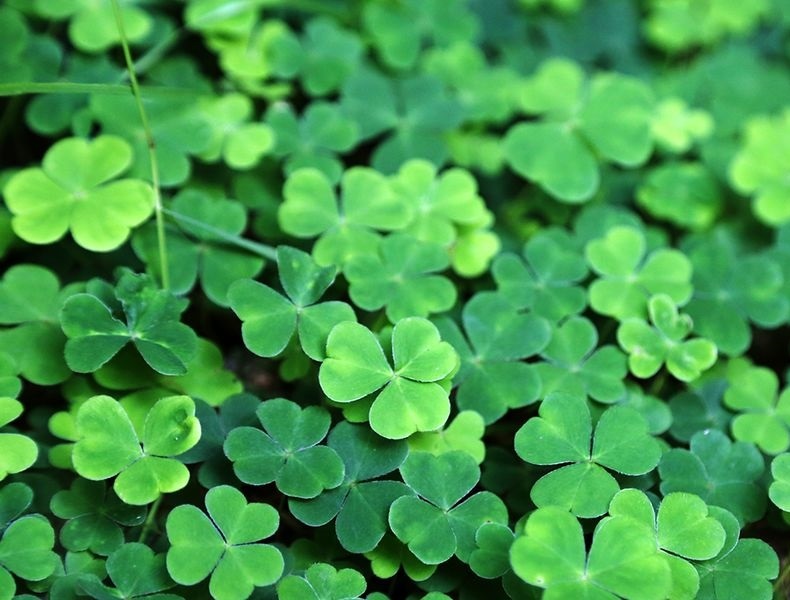 As you know, the four-leaf clover has become a common symbol of St. Patrick’s Day. Because four-leaf clovers are so rare — you have about a 1-in-5000 chance of finding one1 — they’re often associated with luck. But in truth, each leaf represents something special: luck, yes, but also hope, faith, and love.
The reason I mention this is because, over the years, I’ve learned that the history of St. Patrick’s Day represents each of these attributes, too. Now, that might seem pretty deep for a day where we all pinch each other for not wearing green. But it’s true! To illustrate how, let’s take each clover leaf one at a time, starting with…
Hope
Did you know that, in an alternate universe, we might all be wearing blue on St. Patrick’s Day? While “kelly green” is the most popular symbol associated with the day, it didn’t used to be that way. Saint Patrick himself is thought to have worn blue for much of his life, and the Order of St. Patrick, a fraternity of knights founded in the 17th century, adopted the color, too.
So why the color green? Because green was the color of those who sought Irish independence. Beginning in that same century, more and more Irish people began hoping that one day, they would have their own country, free of dominion under a foreign crown. These patriots increasingly wore green as a symbol of Irish identity and culture. It would take centuries for independence to happen, but generation upon generation passed down the secret hope that one day, Ireland would be counted among the free nations of the world.
So why green, exactly? It all has to do with another symbol associated with both Ireland and Saint Patrick: the shamrock.
Faith
Although they are often confused, shamrocks and four-leaf clovers are not the same thing. Shamrocks are standard three-leaf clovers. What makes them special is not how many leaves they have, but what they represent. In the late 1700s and early 1800s, Irish revolutionaries adopted the green shamrock as their emblem. They included shamrocks on their uniforms, their flags, and in their songs. Eventually, the shamrock became the de facto symbol of Ireland itself.
The shamrock’s importance goes back over 1500 years – all the way to Saint Patrick himself. Legend has it that when Patrick first began preaching Christianity in Ireland, he used the shamrock to illustrate the concept of the Holy Trinity. Patrick’s message of putting faith in God resonated, and he reportedly baptized thousands of people.
Over time, Patrick became the patron saint of Ireland, and eventually, like the shamrock, a symbol of Ireland itself.
Love
Just as Ireland’s symbols have changed over time, St. Patrick’s Day itself has changed, too. Now, it’s not only a celebration of the saint, but of all things Irish. That’s important, because Patrick is not the only patron saint of Ireland. Another is Brigid of Kildare – a remarkable woman, and quite possibly, someone who knew Patrick well.
Brigid was born into slavery in the 450s. (The parallels to Patrick are interesting because Patrick was also a slave for many years.) From an early age, Brigid showed amazing love for those who had less than her. She never passed up an opportunity to feed, heal, or comfort the poor. Some stories claim she could replenish by praying to God. Other stories, less religious but just as interesting, tell of the time when she gave away her master’s entire store of butter. Furious, her master tried to sell her to a king. While he bartered, Brigid gave away his jeweled sword to a beggar so he could sell it to buy food. When the king saw this, he took it as a sign that she was holy and commanded her master to set her free.
As she grew older, Brigid decided to devote her life to charity. She founded her own monastery and worked tirelessly to ensure that women and the poor had a safe place to worship. She even founded Ireland’s first art school! One of the earliest books about Patrick said, “Between Saint Patrick and Saint Brigid, the pillars of the Irish people, there was so great a friendship of charity that they had but one heart and one mind.”2 When Brigid died in 525, she left behind an incredible legacy of compassion, charity, and most of all, love.
Luck
“The Luck of the Irish” has become a common phrase. It means to have extremely good fortune, but the saying originated in America, not Ireland – and it was initially meant to be a slight, not a compliment. Here’s how Edward T. O’Donnell, author of 1001 Things Everyone Should Know About Irish American History, puts it:
“During the gold rush years…a number of the most successful miners were of Irish and Irish American birth. Over time this association of the Irish with mining fortunes led to the expression ‘luck of the Irish.’ Of course, it carried with it a certain tone of derision, as if to say, only by sheer luck, as opposed to brains, could these fools succeed.”3
As the decades passed, though, the opposite became true. “Luck of the Irish” now often refers to someone who has succeeded through their wits, their cleverness, and their perseverance. And given how much Irish immigrants have had to overcome over the centuries – including both prejudice and economic hardship – I’d say those qualities describe the Irish people pretty well!

As you can see, reader, there’s more to St. Patrick’s Day than simply throwing on a green shirt or eating corned beef. St. Patrick’s Day represents the hope, faith, love, and perseverance of an entire people. It’s a day for all of us to practice those things as well. A day for us all to treasure and enjoy.
On behalf of my entire team, I wish you a happy St. Patrick’s Day!
Sincerely,